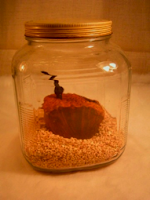 Inside the jar was a large blob of briar hideously mutilated by some sick twisted creature. It had a jagged plank of hard rubber sticking out of its back orifice and a gaping hole in its head. The "face" was contorted in geometrically impossible distortions. Looking closer I realized that this was not just a piece of wood but was actually a pipe!

Whoever, or "whatever", created this monstrosity must have a heart of black ice and a terminally diseased mind. While this pipe seemed to be functional I could not see how anyone would have the courage to actually smoke this thing.

A note fell out of the jar and on it was an address to a web site. I went to the site and found that it was the home of a ghoul who calls himself "The Pipe Butcher". It was this "Pipe Butcher" that created the pipe I just received.

From the site I learned that the pipe's name is Bilious Tortoise and he's really not that hard to get along with. Bilious says that while he is smoker-friendly, he really does not enjoy the company of other briars. Territorial to the extreme, Bilious has recently taken a fancy to a cute little meerschaum brandy and they enjoy sharing a common space on the same pipe rack.

Bilious has expressed an interest in writing a few columns here on "Straight grain" so stay tuned to read about pipe smoking from a real pipe's point of view. It should be fun. Until then, beware the Pipe Butcher!