I want to take this opportunity to congratulate my friend Sinan Altinok on his wedding that takes place tomorrow. While I could not be there in person to wish them well, I proudly do so here. May you have a lifetime of good health, happiness and blessings.

Sinan is the owner of Altinok Pipes where one can get the finest meerschaum pipes and exotic rugs in the world.

I saw this little Stanwell Zebrano dublin pipe online and I kept going back to look at it for a week. I finally pulled the trigger and made the purchase. These pipes are lightweight and feature a nice shank band of Zebrawood. A very handsome pipe if I may say.
Posted by Unknown at 8/23/2008 02:47:00 AM 1 comment: 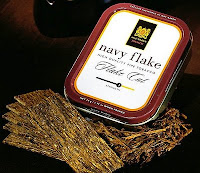 Several years ago I smoked Mac Baren's "Navy Flake". It's a moderately sweet blend of good Burley, VA and cavendish. I soon moved on to more stout blends and forgot about that wonderful flake. My memory of it grew dim with time and the flavors I once enjoyed were nearly forgotten.

A few days ago I was at the local JR Cigar store and saw a tin of this once-beloved flake sitting there on the shelf. I purchased the tin and was pleasantly surprised to see that Mac Baren now packages this blend in 100 gram tins as opposed to the previous 50 gram standards. I opened the tin, gently pulled away the thick gold embossed sheets of foil paper and took a nice whiff of the scent of the fresh flakes. I had forgotten just how good that sweet aroma could be.

The other day I took an oversized lovat and filled it with four flakes. The way I smoke flakes is that I put them together uniformly then bend them once lengthwise then once widthwise. The wad is pressed together at the bottom and worked gently into the pipe. A medium-sized pipe takes one flake perfectly so this huge pipe holding four was going to make for a good long smoke. I lit the pipe and that familiar flavor of honey, anise, chocolate and nut came back.

I smoked that pipe right after breakfast until it was time for me to pick my son up from school. On this particular day my wife was in Manhattan with our girls having a "girl's day out" so I took the opportunity to have a "guy's day" with my five-year old son Sky. I was still smoking the pipe while in the truck and Sky commented that my pipe smelled better than usual. Taking this as a compliment I continued smoking it on the way to the toy store. While we were there Sky saw a new bicycle that he suddenly could not live without. I had not planned on making such an elaborate purchase of a bike. I was thinking a new Transformers toy or something in the Spiderman line of child entertainment but alas, my son and that Huffy were instantly inseperable.

Twenty minutes and many more dollars later, Sky and I are driving home with a shiny new bicycle in the back of the truck and the Navy Flake pipe in my mouth. It was a fun ride home with Sky chattering non-stop (literally!) about his new acquisition and me enjoying the wonderfully consistant bowl of tobacco. Once we got home, the bike came out and soon Sky was tearing up the street with me following close behind on foot. I was still puffing away on the same bowl of Navy Flake while we were outside breaking in my son's very first bicycle. I'm sure that is a memory we will both have for the rest of our lives.

Now whenever I smoke Navy Flake it brings me back to that day I got my son his first bike. That bowlful lasted a total of six hours and seventeen minutes. While I many not have that many smokes for such a length of time again, there will definitely be many more bowls of Navy Flake. This blend is staying with me for life.